Do you want to experience the vibrant city of San Francisco? Choose a direct flight and make traveling easy as possible – read more in our extensive guide and see all airports that offer direct flights to San Francisco. 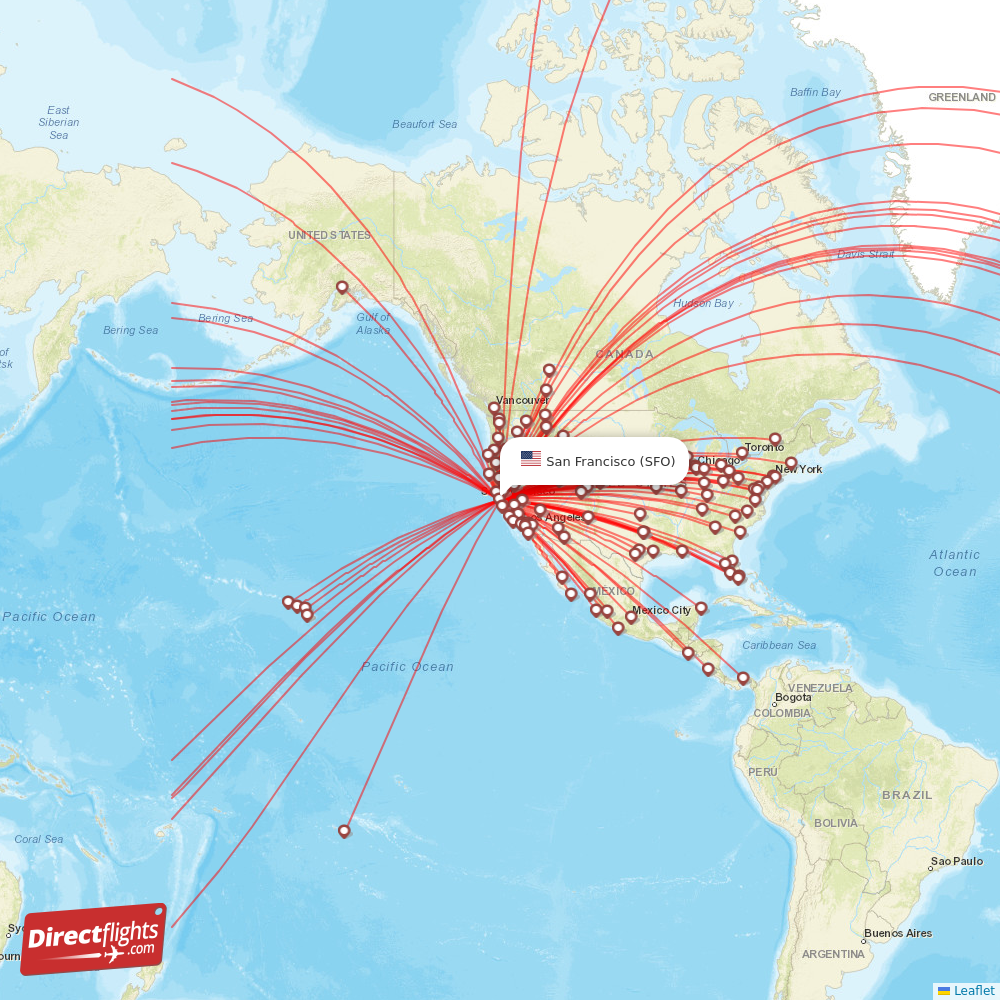 San Francisco is a beautiful Californian city steeped in history and culture ready to be discovered by the discerning traveller. San Fran is bound to cast a spell with its unique charm and natural beauty, luring the visitor back time and time again. Famous for its impressive ‘Golden Gate Bridge’ landmark, San Francisco is one of the most popular cities in the USA attracting millions of visitors every year.

Situated on the golden California coast, San Francisco is renowned for its laid-back vibe, alternative lifestyles and free thinking. As well as boasting one of the world’s best known suspension bridges, San Francisco enjoys a beautiful setting in the heart of the Bay Area with rolling hills, great wildlife, historic Victorian architecture and gravity-defying steep streets.

To make traveling as convenient as possible, we recommend that you choose a direct flight when you are headed for San Francisco. This is possible from most parts of the US – please use the links below to see all flight options from the airports with the most frequent air traffic to San Francisco.

Maybe you are traveling to San Francisco from out of the country? In that case, you can find direct flights from several parts of the world. Some popular routes are presented below – please use the links to see all options of each route.

Explore all parts of San Francisco

The city has a fascinating cultural history dating back to the Gold Rush immigrants in the 1800’s. It is a maze of distinct neighbourhood communities including Chinatown, the Spanish Mission District, an Italian district, a Japanese neighbourhood and Castro and The Haight which is now popular with the gay community.

Explore on foot and enjoy the colourful temples, crafts and markets and sample the great varieties of food in the local cafes and restaurants. Take a tour to the notorious maximum security prison of Alcatraz (book in advance if you are visiting in the busy summer months) and immerse yourself in the award-winning audio tour.

Alcatraz is well known for its infamous inmates including Al Capone and Machine Gun Kelly and was considered to be escape-proof although several prisoners did manage to escape in the 60’s never to be seen again! Hop on a tram and negotiate the crazily steep streets which zig zag through the city and admire the spectacular scenery across the bay.

Further afield, San Francisco is a great base from which to explore Big Sur and the beautiful Californian coast along the Pacific Coast Highway or head inland to Yosemite National Park and the winelands of the Napa Valley.

San Francisco is one of the major gateways on the US west coast. With a choice of three airports, San Francisco offers numerous scheduled flights with all the major airlines to cities worldwide as well as an excellent network of domestic flights to destinations within the US and Canada.

Directflights.com can help you to find the best deals on cheap flights to San Francisco by using our flight search box above. If you're after low cost flights, try booking outside of the busy months such as during spring or autumn.

As well as finding you the cheapest prices on flights, we can also assist with searching for last minute flights to San Francisco and many other destinations worldwide.

With an average of 60 % sunshine throughout the year, it is not a surprise that San Francisco is a popular destination with sun seekers. During the winter months, November to January, the temperatures can reach a maximum of 14˚C as well during the rainy season. The summer comfortably sees warm days reaching 24˚C and you may even experience San Fran’s infamous fog which rolls in from the Pacific Ocean.